I actually drifted into writing adult romance and erotica.  I have been a writer ever since I was in college and have had several novels and short stories published in various genres. I realised that the romantic elements in my novels was looming larger with each successive one and the relationships were getting decidedly hotter. Yet in those earlier novels the bedroom doors were kept firmly closed, when I really wanted to let my readers peek inside and share the action. That was when I decided to go for it and write an erotic novella. I entitled it The Countess's Weakness and wrote it under my pen name of Gill Summers. 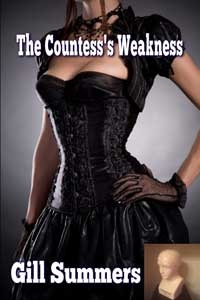 Enter the wonderful science of phrenology

I collect old books and have accumulated a sizable number of old tomes on phrenology. This was the first 'science of the mind,' which was discoeverd at the end of the 18th century by Dr Franz Joseph Gall. The name comes from the Greek phrenos, meaning 'mind', and logos, meaning 'knowledge of.' It actually predates psychology, which was derived from psychos, meaning 'soul,' and logos. Thus, psychology is misnamed, because phrenology got there first. 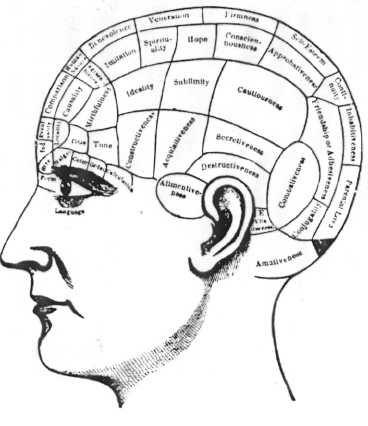 Essentially, phrenology proposed that the brain was made up of numerous organs or faculties, each of which governed a particular emotion, quality, mental ability, skill or talent. The shape of the skull was thought to mirror the convolutions of the brain, so that a lumpiness over a particular faculty would indicate an enhanced emotion or ability, while a depression would show the reverse. Professional phrenologists set up consulting rooms and 'read' people's heads, to show what skills they had, what area of life they would be best suited for and what sort of partner they would best make the acquaintence of. People who had a weakness in some area of their character could have it enhanced by the technique of 'phreno-mesmerism,' whih involved being put into a mesmeric (hypnotic) trance and having their weak faculty massaged and enhanced.

Look at the chart above and see the areas at the back of the head, labelled 'amativeness.' If this area was lumpy on each side, then a phrenologist would decalre the individual to have sex on the brain. They could reduce the effect through phreno-mesmerism.

So in my tale, Julie, the Countess of Leicester is perceived by her husband, Lord Walter Barrington-Wade, the fourth Earl of Leicester to have a weakness that is threatening their marriage. She is a compulsive gambler and so he seeks the help of Professor Arthur Nelson, a consulting phrenologist to cure her weakness. But Julie's 'weakness' had actually  developed because of lack of action in the bedroom. rather than having a weakness for gambling, she has an enhanced faculty of amativeness, which Arthur recognises and is able to help with, along with his secretary, the widow Mrs Madeline Scales!

So come, find out about the Countess's treatment and cure! It  will tell you all about sex on the brain!

Go to the Books page to get the link to Adult1Books where you can read an extract.